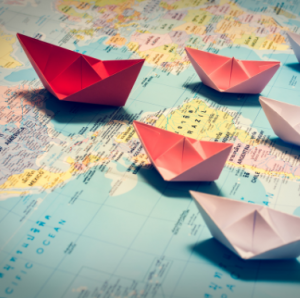 In my youthful dreams of what the future might hold, I never thought I’d attempt a business of my own. I rather liked the message of the old Doris Day song, “Que sera, sera, whatever will be, will be, the future’s not mine to see …” The life of the wanderer, the perennial traveler, was what most appealed to me.

I’ve heard it said there’re two types of people in the world: leaders and followers. A wanderer, by definition, is neither. Surely, making a success of one’s own business requires an innate bounty of leadership qualities. Yet here I am, the wanderer, making a go at my own business, a freelance writing service.

Just what makes me think I'll be successful in business?

I’ve embarked on a couple of money-making ventures before this one. I didn’t pursue them with single-minded devotion; rather, they were simply ways for me to bring in extra cash while doing my part to keep a home life running. But with no clear-cut goals, or even a desire to make anything of these ventures, they never really took off. They did bring in money, though, so with no overhead the money was just gravy over the top of my husband’s regular paychecks (Ok, husbands’ – one at a time, of course.)

So with no real grounding in being a successful businessperson, or entrepreneur as I’d rather say, what makes me think I can run with the big dogs? Just what are the characteristics of success in terms of making my way through the vagaries of business ownership?

“The credit belongs to the man who is actually in the arena, whose face is marred by dust and sweat and blood; who strives valiantly; who knows great enthusiasms, the great devotions; who spends himself in a worthy cause; who at the best knows in the end the triumph of high achievement, and who at the worst, if he fails, at least fails while daring greatly, so that his place shall never be with those cold and timid souls who neither know victory nor defeat.”

There are lists of everything all over the internet. I chose not to look at what others said of leadership but drew out of memory the quotes and ideas of others who’ve made a deep impression of my life. I said in the beginning that I considered myself to be neither a leader nor a follower. And yet I believe that in order to be successful in my sole proprietorship, I need a sure, steady command of myself and an ability to lead others. How do I stack up as being a leader?

So, am I a leader? I know I can be a good follower when I believe in a cause and have great confidence in the leader. As far as leadership, I guess we won’t know that until all is said and done.

What about you? Are you a leader? If you’re engaged in your own small business and you’re achieving success, then I’d give you a big ole ‘A’. Maybe even heck yea.

Interested in learning what your own leadership style might be? Take a quiz to find out. PlayBuzz.com offers a short, free short, free test to gauge your leadership quotient.